How to make a hanging basket look full How to design a flower bed

Cottage garden or colour blocks? Prairie planting or urban oasis? Whatever your style, follow these 7 easy steps to create a flower bed to be proud of. Soft fruits are often ideal for maximising output in shady areas of the garden. How to plant a container herb garden

Herbs are a kitchen essential and easy to grow! Learn how to start a container herb garden. How to plant a tree

Give your tree the best possible start in life with our complete guide to planting potted or bare root. Dark corner of the garden? Gloomy old shed? Transform them with colourful climbing plants that grow in shade - we’ll help you choose the best.

- this versatile perennial flower is easy to grow and care for

Dianthus is one of those lovely traditional flowers that our grandparents used to grow, and which are back in fashion with a vengeance! Equally at home in a cottage garden or a formal flower bed, it’s one of the longest flowering and brightest plants of the summer. You might know them as Pinks or Sweet Williams, but whatever you call them, this deceptively tough little plant will bring scent, colour and structure to your garden for months on end - we think it’s a border essential and here’s why. 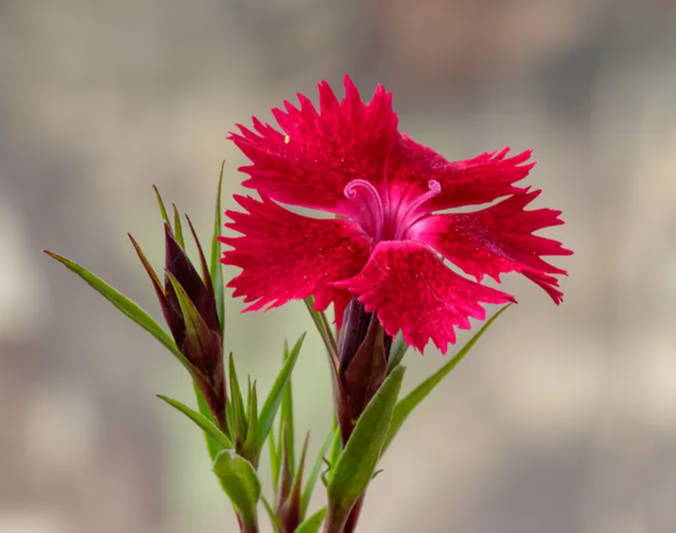 In last year’s perennial border, my Dianthus plants (Red Robin) were the stand out performer. Fresh green foliage appeared in mid-spring, and the flowers bloomed profusely from May until October. Most Dianthus species will bloom from May or early June, lasting well into autumn (and you can increase their flower production by deadheading). Interestingly, until 1971 Dianthus had quite a short flowering season, but then a breeder successfully developed varieties that don’t set seed and therefore bloom for months.

The scent of Dianthus is variously described as warm spice, vanilla or cloves. It’s an evocative fragrance which makes Dianthus a great choice for planting in patio containers, near seating areas and alongside garden paths where its fragrance can be properly appreciated. Some of the most strongly scented varieties include Memories, Tickled Pink and Passion. 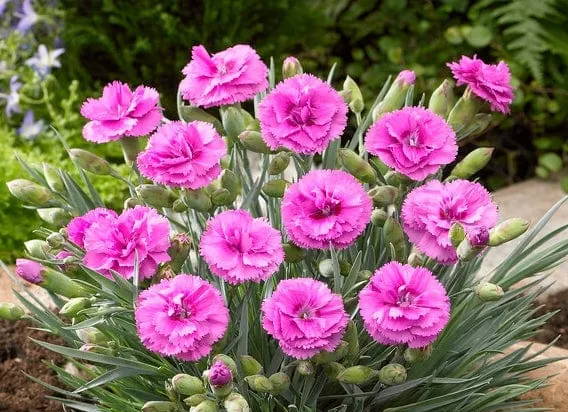 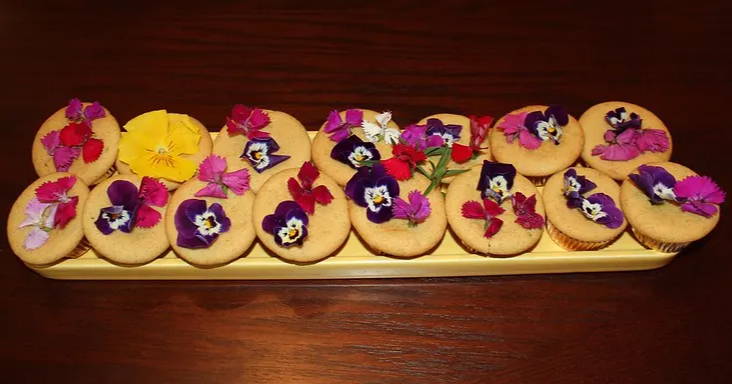 3. You can eat Dianthus

Dianthus petals have a sweet, spicy flavour which is perfectly suited to garnishing drinks. Try floating whole flowers in a jug of punch, scattering onto cocktails or freezing in ice cubes.

You can also use the petals to top cupcakes and desserts or toss them through salad leaves to create a bright and colourful side dish with a difference. Although you can eat the stems, they taste quite bitter, so they’re probably best avoided.

4. Dianthus is easy to grow

Dianthus is a very easy going plant which can thrive in most garden conditions. It prefers a position in full sun with well-drained soil, but apart from that can be left to its own devices. The compact height of Dianthus means they won’t need any support while growing and can be planted anywhere from the front of borders to patio pots and even in hanging baskets. These tough little flowers typically have no issues with pests or diseases, don’t need feeding and have excellent drought tolerance. 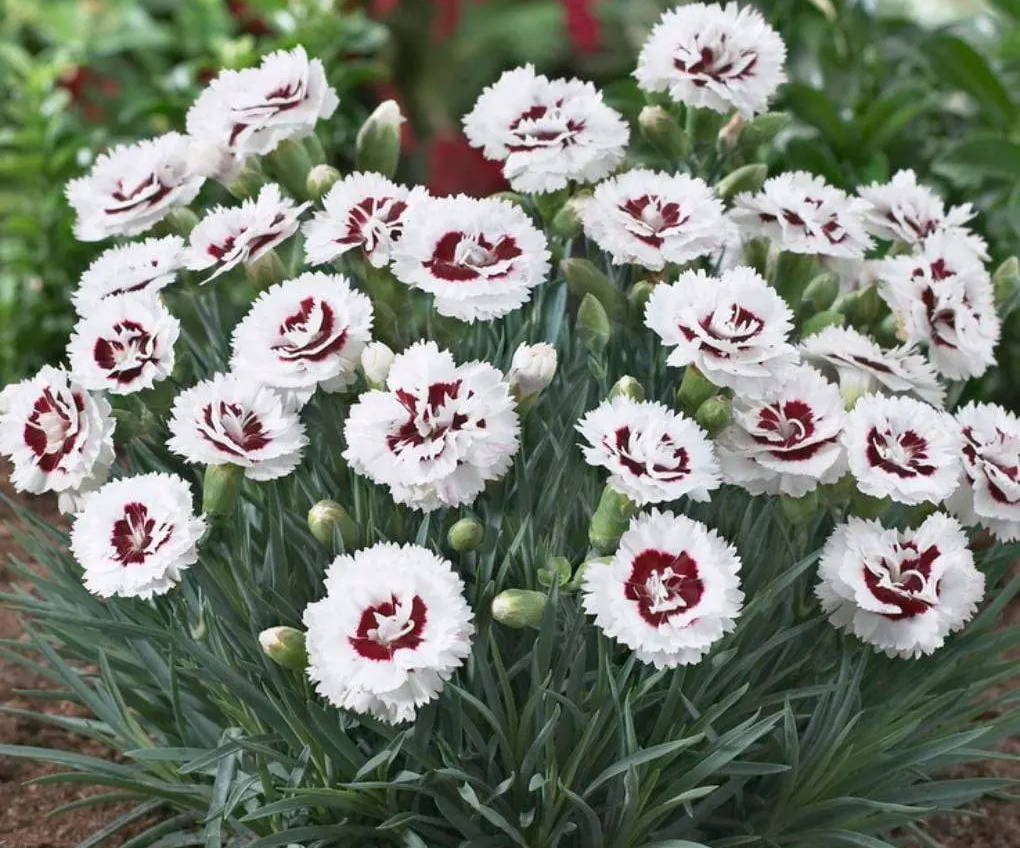 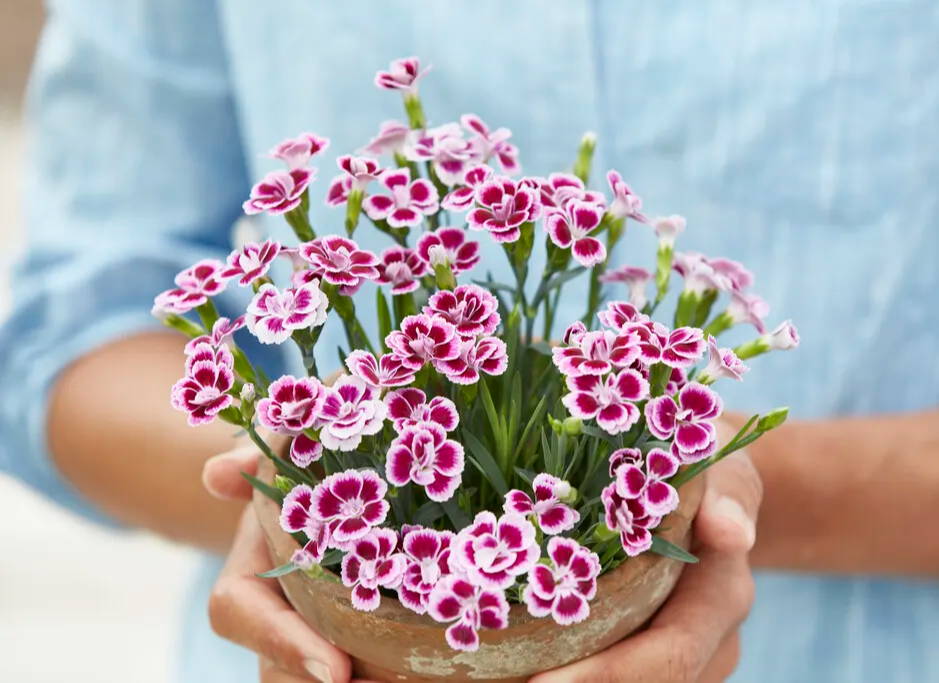 5. Dianthus is perfect for pots

Petite but floriferous Dianthus makes a perfect container plant, with its lovely summer scent making it particularly good for patio areas and windowboxes. It’s a great alternative to annual flowers, as you’ll only have to plant once to enjoy colourful displays every year. Plants in pots need a little more care - more regular watering and the occasional feed in spring and summer. You should also choose containers with good drainage or add some perlite to the bottom of the pot.

Do Dianthus come back every year?

Dianthus are perennials, so they will grow back every year once planted. They do tend to get a bit woody after six years or so, at which time you may want to replace them. To do this cheaply, just take cuttings from your existing plants.

To extend the life of your Dianthus plants and keep them looking fresh, cut down the dead stems and foliage to around 3cm above the ground in late autumn or early winter. This will encourage them to grow fresh new foliage the following spring.

Are Carnations the same as Dianthus?

The lovely fresh looking blooms in your garden might be a world away from the last-resort petrol station bouquets of carnations, but believe it or not they’re related. Carnations are a member of the Dianthus family and have been bred with long stems, so they’re great for cutting gardens. They don’t, however, have the lovely fragrance of other Dianthus varieties.

Why are they called Pinks?

Most Dianthus that are grown in gardens are Dianthus barbatus, commonly known as Garden Pinks. I used to think it was about the colour, but then I realised that was just the variety my Grandad grew and that pinks also come in many shades of white, red, purple, yellow and even green. The name ‘pink’ actually describes the serrated edges, which look as if they’ve been cut out with pinking shears! This homely name is a far cry from the genus name Dianthus, which translates as ‘flower of god’.

Where does Dianthus grow best?

Dianthus grow best in full sun. This means planting them where they’ll get at least six hours of daylight. They’re very versatile and due to their compact height, look great in the front of a cottage garden style border - be sure to space them well and avoid overcrowding. They also go well with prairie and meadow style planting schemes, and are ideal for patio pots. Plant your Dianthus in well drained soil and don’t overwater them, as they don’t like to be waterlogged.

Dianthus are fully hardy, with a UK rating of H6 or H7 depending on the variety. This means that they’ll be fine outdoors through the winter in all areas of the UK, and won’t need any frost protection. You can plant these tough little flowers any time from March to October - they have excellent drought tolerance, too.

With their enticing scent and long flowering season, pollinators love Dianthus. The best for attracting bees and butterflies are the more open shaped flowers such as Pink Kisses, Flutterburst and the Cocktail series. Dianthus are rich in pollen and nectar. They’re particularly appealing to bumblebees, honeybees and hoverflies while the varieties Carthusian Pink and Maiden Pink are pollinated almost exclusively by butterflies.